Twenty-odd years ago during the Border Wars, young Dylan thrived on the Battlefield. Even through he was young and aggressive, he knew to utilize his power at the right place: on the battlefield, protecting his homeland.

Brave, strong, gritty and indomitable; no matter how dangerous the enemy, Dylan never hesitated to face them head-on. Armed with his heavy broadsword, he drove back any enemy that dared to challenge the kingdom. His dominating presence on the battlefield simply couldn't be overlooked as he quickly rose through the ranks going from mere soldier to frontline captain.

Unknown to Dylan at the time, his heroic deeds and righteous personality caught the eye of the late King William. In the future, he would become the strongest shield that protects Princess Angelia. 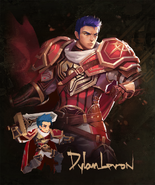 Retrieved from "https://sdorica.fandom.com/wiki/Dylan_SP?oldid=15930"
Community content is available under CC-BY-SA unless otherwise noted.